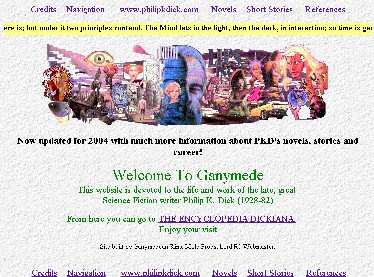 I have been waiting to get my hands on the newer version of Dave Hyde’s PKDweb site for a little while now before I put up a version of that site within a site essentially (or his own site if he wanted it that way). The version that was on the on philipdick.com was from 1999 which I never realized until Dave himself told me. And then he said he had a revision from 2003 that was updated. I pestered him for it and patiently waited and worked out a way for Dave to send it to me. I had the site in my hands just over a week ago and I have been using that time to upload test and make some fixes to it. As a proof of concept I put the old one up on the site first and configured the site to host this type of site within a site. Then I archived the old 1999 one here: http://1999pkdweb.philipdick.com and put the new code in place on the server the other night at /pkdweb/

Immediately, I realized that we had an issue that Dave developed the site on a PC which is case insensitive and the site is going to live on a case sensitive server. Several of the site links were broken that I fixed and let Dave look at it before going live. Obviously, he gave is okay! So the site is live with some deployment issues. I will be working to fix what I know about in the week or so ahead but if you see a broken link or any other issues, feel free to report it to philipkdickfans[at]gmail[dot]com 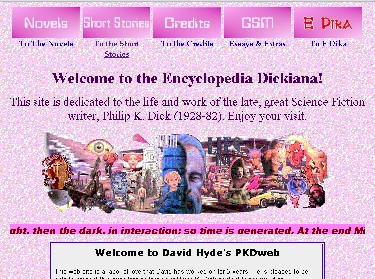 Another thing that I recently noticed is that there are many links to Dave’s pages on Wikipedia.org in the Philip K. Dick Bibliography area. I think that says much about Dave’s work on this content. When I asked him about it, he claimed that he didn’t know about it… A project I put on my list is to increase the number of links to philipdick.com and Dave’s content from Wikipedia.org to help interested fans find the site and to help the site’s rankings in search engines. And fix any broken links to his content with the new site change.

I really appreciate all that Dave contributes to the community and I’m very impressed with this site he did by himself without knowing html. Maybe in a few years, we can squeeze a 2010 version out of Dave!?!?