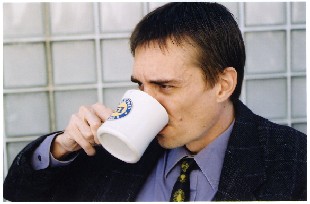 Cal Godot was visited by the ghost of Philip K. Dick in March of 1982, not long after the author’s demise. Or perhaps that was just part of his first experience with LSD, which occurred the same weekend. In pursuit of his own exegesis of reality, Godot read widely and traveled wildly, working variously as a journalist, house painter, farmhand, and literary pugilist. In pursuit of higher understanding of an explicated reality, he studied with Navajo shamans, Zen mystics, Tibetan monks, chaos magicians, and of course philosophy professors. He currently lives in Hollywood, where he pursues various clandestine and subversive activities in the entertainment industry. His writing, along examples of his photography and filmmaking, may be seen on the website Postmodern Angst (www.calgodot.com).

Born out of his passion for the work of Philip K. Dick, Jason Koornick created the original Philip K. Dick fan site in 1999 when the Internet was young. He compiled PKD related content from many sources including fans from around the world. The site grew organically and Jason became friends with Dick’s daughters, Isa Dick Hackett and Laura Coelho as well as PKD’s former agent Russell Galen who recognized the value of the fan site to their father’s legacy. In 2003, Jason entered into a formal relationship with the PKD Estate to work together on the official PKD site as well as to produce a film based on the Dick short story “The Golden Man.” He moved to Los Angeles and was Executive Producer of Revolution Studios’ “Next” starring Nicolas Cage which came out in 2007 (based on Golden Man). With Jason at the helm, the Philip K. Dick fan site was featured in Entertainment Weekly, USA Today and Wired magazine. Although he has stepped away from web development, Jason continues to enjoy Philip K. Dick. He is especially thrilled about the publication of the Exegesis. Jason works as a screenwriter/film producer and musician living in Atlanta. He wrote the cable movie “A Mile In His Shoes” starring Dean Cain for GMC TV. His favorite novel is Ubik and his favorite short story is Golden Man (naturally).