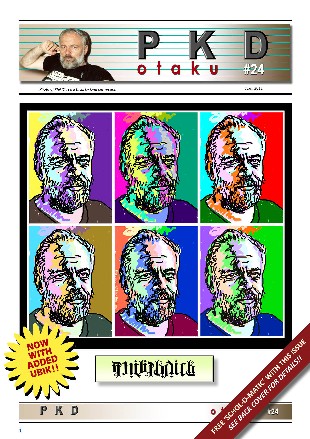 A new issue of PKD Otaku has been published. You can view it here: PKD Otaku Issue 24 or view past issues.

This book is an excellent academic study of the theme of religion in the works of Philip K. Dick. The book is a slim volume and could have been much longer but you still get your money’s worth from the amount of analysis and information crammed into those pages.

The book is divided into three sections which consist of Dick’s writings view from a religious point of the view in three areas of his career. His early writing is covered along with his middle and later (VALIS) years are extensively reviewed and analyzed. I felt that the work covered the topic extremely well and I learned not only about Dick’s work but about religion.

The text was published several years ago so it might be a little difficult to get a hold of but the price might turn some readers off. If you are interested in a religious analysis of the works of Philip K. Dick, I believe this one is the only one out there and it is very well written.

I sense something brewing with the issue of incorrectly managed copyright renewals and Public Domain Philip K. Dick stories. We have already seen the news about the producers refusing to finish paying for the rights to Adjustment Team and there are eleven stories that have been put into Project Gutenberg that I have archived on this site also. These facts appear to be generally known.

At SFFaudio.com there have been two articles that makes me believe first that they are researching the topic and second that there are many other short stories that are now in the Public Domain that few people realize. Their article Commentary: Philip K. Dick’s PUBLIC DOMAIN short stories, novelettes and novellas is the most stunning for me. The article details the status of each story and I count twenty-six in the Public Domain with seven more likely.

Another article,Copyfraud by the Philip K. Dick estate for Philip K. Dick stories published in 1954 and 1955, color codes a copyright form and most of the stories are listed to be in publications or issues that they do not appear in. The vividness of this image jumps out at the reader.

There is some overlap but I think that the years covered are 1952-1955 and that the research beyond those years hasn’t occurred yet. At the rate this is going there won’t be much that isn’t in the Public Domain. This would be a huge waste of potential revenue that Electric Shepherd Productions will lose if they no longer own the rights to all these stories. And I’m not aware of the legal aspects or issues if any of the films made have recourse to sue for fraud.

Review by Jason Koornick: Time Out Of Joint (1959)

On Political Satire in P.K. Dick’s The Man Who Japed

Digressions on The Man Who Japed