Published June 1, 2016, “The Divine Madness of Philip K. Dick” by Kyle Arnold is available through Amazon.com or your favorite book supplier.

The book is a biography shown through the lens of a clinical psychologist. From the description at Amazon.com and probably the back cover of the book also:

“In The Divine Madness of Philip K. Dick

, clinical psychologist Kyle Arnold probes the fascinating mystery of Dick’s heart and mind, and shows readers how early traumas opened Dick to profound spiritual experiences while also predisposing him toward drug dependency and violence. Disputing the myth that Dick had schizophrenia, Arnold contends that Dick’s well-known paranoia was caused by his addiction to speed. Despite Dick’s paranoia, his divine madness was not a sign of mental illness, but a powerful spiritual experience conveyed in the images of science fiction.”

Published April 9, 2016, “Ganymedean Slime Mold On Tour And Other Things: Essays And Stories, 1988-2015” by Lord Running Clam is available through Amazon.com, Wide Books (with a ten dollar discount), or your favorite book supplier.

The book is a collection of stories and essays, and for Philip K. Dick fans, there are essays from For Dickheads Only and PKD Otaku. From the description at Amazon.com and probably the back cover of the book also:

“Its the umpteenth decade in the War On Drugs. The 1980s. Ronald Raygun is dozing off and Nancy just says No. Into the fray inches the Ganymedean Slime Mold, armed with telepathic power and not enough weed. Will the forces of righteousness prevail? Or will the dark denizens of the Government squash this alien dopesucker? A true story. Inspired by Philip K. Dick and challenged by Hunter S. Thompson, Lord Running Clam here presents his stories and essays written over the last thirty years, including the best from the zines ‘No Bullsheet’ and ‘For Dickheads Only’-and everything he wrote on Philip K. Dick for ‘PKD OTAKU’.” 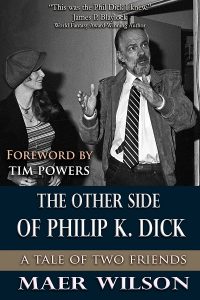 Expected to be published later this summer, The Other Side of Philip K. Dick By Maer Wilson is a memoir that tells the story of her ten year friendship with Philip K. Dick from 1972 to 1982.

From the description at Maer Wilson’s web site:

“What is the truth behind the legend of Science Fiction great, Philip K. Dick?

In spring, 1972, Phil Dick moved to Fullerton, CA, where he met Theatre student Mary (Maer) Wilson. Amid marriage proposals, marathon talk-fests and a love for music and films, they forged a strong friendship that would last the rest of his life.

Wilson’s quirky, yet unflinchingly honest, memoir reveals a funny, compassionate and generous man. She captures an inside view of one of our literary greats – a brilliant writer who gave the world some of its most revered Science Fiction.”

Note: If you don’t see the book cover and title above, most likely your ad blocking software/browser extension is not allowing the content from Amazon.com

Within You, Without You: Philip and Jane Dick

On a frigid Chicago day in December of 1928, Philip K. Dick was born twenty minutes ahead of his sister Jane. The twins, the boy with blonde hair and the girl with dark hair, were six weeks prematu...
View on Facebook
· Share

Blade Runner 2039 is the latest chapter in the expanding Blade Runner universe from Titan Comics and Alcon Publishing. Aahna “Ash” Ashina returns in this new 12-issue series which is being touted ...
View on Facebook
· Share

Lamron Lit Corner: Philip K. Dick’s Do Androids Dream of Electric Sheep? and what a title means — The Lamron

While the genre of science fiction is generally believed to find its origins in 1818 with the publication of Mary Shelley’s Frankenstein, its roots dig far deeper than the 19th century. But, instead...
View on Facebook
· Share

Philip K. Dick, a prolific fiction writer of the 20th century, grew intensely interested in Christian theology, and his writing reflects as much.
View on Facebook
· Share

Dreams of Memory, Dreams of You: The Films of Philip K. Dick