‘Minority Report’ Review:
A Philip K. Dick Movie Fans Can be Proud Of

As a die-hard Philip K. Dick fan, I went into last night’s opening of Minority Report with some pretty high expectations. I had seen all the previews (including the internet-only Spielberg edited trailer), watched Cruise and Spielberg interviewed multiple times on television, read a plethora of articles and of course read the short story at least three times. After all that, I was holding out hope that Minority Report would live up to the concept I had built up in my mind. Despite my enthusiasm and desire for this movie to finally articulate PKD’s vision on the big screen, I was almost prepared to be let down in some way.


Thankfully, I am glad to report that this movie succeeds on almost every level. The anticipation of the last two years has paid off in a big way for this Phil Dick aficionado. After all the time us PKD fans have spent trying to explain the complexities and profound paradoxes in our favorite author’s fiction, we can now direct our friends to the local multiplex to experience a sense of the trademark phildickian paranoia for themselves.


The first thing that truly impressed me in Minority Report was the dynamic imagining of the Precrime process. From the opening sequence, Spielberg and company had the audience in their grip. Due in part to exciting pacing and nail-biting tension, the first scene where the Precrime unit stops a murder in the nick of time is both exciting and relevant to the story. Unlike in Vanilla Sky, where the first scene in Times Square was totally cool and surreal but had nothing to do with the plot.

I won’t drop any spoilers that you haven’t seen from the trailers and publicity materials. By now, every visitor to this web site knows that Minority Report is about a futuristic police agency which arrests would-be murderers before they commit their crimes. This is the essence of Phil Dick’s short story and is expertly captured in the movie. When Cruise’s character, John Anderton (the head of the Precrime division) gets accused of murdering a man he has never heard of, he must race to prove his innocence. A central moral dilemma is established since Anderton believes so deeply in the tenets of the Precrime system – he must face a choice of whether to fulfill his foreseen destiny thus validating the system or save himself while proving Precrime to be wrong. This conflict plays out a number of times during the movie to great dramatic effect (of which Spielberg is no stranger).


The look and feel of Minority Report should satisfy Phil Dick fans. While Spielberg uses the opportunity to bring alive all sorts of “gee-whiz” technological devices, they exist in the story for a reason not just to impress. For example, a futuristic newspaper (shamelessly touted as USA Today) displays moving images similar to a TV program. OK, that’s cool but when Anderton goes on the run, the headline changes before reader Cameron Crowe’s eyes to a flashing “Breaking News” update. Crowe’s character reacts to the news by identifying Anderton to the authorities upon seeing the update. It’s the little details like this that make the movie so satisfying. Many other technological breakthroughs such as the “image scrubbing” which Anderton uses to reveal clues in the precog’s visions is both delightful to behold but also makes sense in the context of the story.


Actor’s performances were dead on. Credit must be given to Max Von Sydow (who plays aging Precrime founder Lamar Burgess) and up and comer Colin Farrell as justice department agent Witwer for their compelling and exciting performances. We will definitely be seeing more of Farrell in the years ahead and I look forward to every minute of it. Say what you want about Tom Cruise who has certainly played some cheesy roles in his career but you can’t deny that the actor is charismatic and draws the viewer into the action. He plays the part of Anderton pretty straight but also allows occasional glimpses into the soul of a tortured father which I found to be heartening. 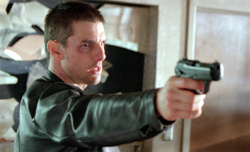 Kudos must be given to John Williams whose score is beautiful, frantic, fast-paced, subtle and intense. The music played perfectly with each scene particularly the action sequences which had my heart racing. Williams’ fans will find this to be a departure from his usual lush arrangements (although there are hints of that too). When you watch Minority Report, pay close attention to the music which is the work of a master.


Many PKD fans are probably wondering how close this movie is to the 1956 short story by Philip K. Dick. Without revealing too much, it is safe to say that Spielberg and writers Jon Cohen and Scott Frank used the story as a spring board for the basic plot of the film. The ending wasn’t changed as much as embellished to give the story a few more twists and turns. But the third act, we are into the screenwriter’s version of the story which is fine because it takes the story to a whole new level. For this viewer, it was like experiencing an expanded version of short story that I never wanted to end.

Considering the stakes involved in a movie this large and the many ideas of the talented players, Minority Report does remain true to Philip K. Dick’s story. It would have been very easy for the screenwriters to simply take the original concept and create a completely different story (as they did with Total Recall). But all the original characters are accounted for (with some additions of course) and mostly the motivations are intact although I have to say that the original ending is modified a bit for Spielberg’s humanistic purposes. Honestly I don’t have a problem with this because it only serves to strengthen the dramatic elements of Anderton’s struggle to clear his name.


The main departure from the short story (besides the addition to the ending) involves the void left in Anderton by the kidnapping of his son. This dark piece of Anderton’s past serves to create a sense of desperation in our main character and Spielberg utilizes it to grand effect. This is where the sentimental and ultimately optimistic side of the director comes to light and I must conclude that I believe if Phil Dick had written Minority Report as a novel, he probably would have found a way to create a resounding conflict like this one in the protagonist. 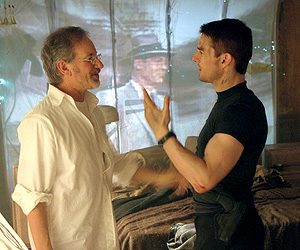 Does Minority Report have it’s flaws? Certainly. In particular, there are a couple of plot elements that were slightly inconsistent if you think too hard about them (like I do!). The action scenes drew too much from the “MTV-style” of film-making with so many close-ups that at times it is difficult to follow the action. But these relatively minor flaws (and who am I to tell Steven Spielberg how to do his job?!) do not in any way take away from the potency and urgency of the storyline.

The other element that frustrated this viewer was the never-ending parade of corporate product placements. Again, Spielberg was probably trying to prove a point that advertising will be all pervasive in a futuristic society (as Phil Dick himself imagined) but in the process seems to be promoting that idea by advertising many specific products that I hope will not be around in fifty years. It’s kind of like the “Natural Born Killers” idea of commenting on violence in our society by showing so much of it that we in essence desensitized. I’ve never bought this paradoxical way of treating a controversial topic and we do see it repeatedly in Minority Report in regards to advertising.


In the end, I truly believe that Philip K. Dick fans are finally getting what they deserve – a film that embodies the twisted, reality-bending ideas of our favorite author which opened our minds and made us see the world a little differently. Minority Report is the best cinematic adaptation of any of Phil Dick’s work to date and I hope that it paves the way for a whole lot more of them.

One thought on “Review by Jason Koornick: Minority Report 2002”