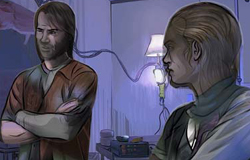 Thank you Rick Linklater. Thank you Tommy Pallotta. Thank you Keanu, Woody, Winona and Robert. Thank you Dick daughters. Against all odds, you have given Philip K. Dick fans the ultimate gift – a truly faithful adaptation of our favorite author’s most-beloved book. So faithful in fact, that the film is as much about PKD himself as Bob Arctor’s story, the cast or the film-makers.


And what a tribute it is – a dark, paranoid, trippy, funny, absurd, open-ended work of art that defies any conventions of film-making. It’s safe to say that Philip K. Dick himself would have been thrilled with the film version of A Scanner Darkly which is as true to the source material as possible. What all this means for PKD fans is that we have to buy tickets and see this movie when it comes out in theaters. We have a responsibility to support this film in order to prove that there is a hungry audience for faithful, artistic adaptations of not only Philip K. Dick material but intelligent, literary and experimental entertainment in general. 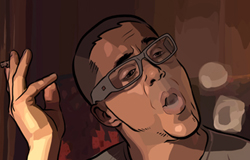 After catching a preview screening of the film, the PKD fan in me felt special, privileged that this movie was made for myself and the throngs of fans around the world – certainly not a mainstream group to be sure. It has essentially all the elements of the novel and the tone is consistent with PKD’s often rambling writing. To this viewer anyway, plot, character development and the other conventions of movie-making take a back seat to the EXPERIENCE of watching the film – the sights, sounds, music washed over me and put me in a trance-like state, not entirely unlike Waking Life. For me, the vibe of the film is its greatest asset.


Watching A Scanner Darkly is the cinematic equivalent of taking in an abstract, impressionistic painting – the act of viewing offers its own rewards and is an integral part of the artist’s vision. Like a painting, Scanner appeals to the creative, emotional part of our mind rather than the rational, analytical part.


I won’t get into the technical aspects of the film-making or the specifics of the story but I will point out that the roto-scoping animation is strikingly effective in the context of this story. The form and content fit together seamlessly – like Substance D, the drug at the center of Scanner, the animation makes the viewer feel as if they are on shaky ground. We recognize the actors and scenery in our rational mind but there’s something unexplainable about the animation style that is both unsettling and unfamiliar. For a story as dark and paranoid as Scanner, the disconnect enhances the unsteady nature of Arctor’s reality. I was skeptical at first, but I’m now a big fan of Linklater’s approach to this piece of material. It seems that the director made very few, if any, artistic sacrifices in this adaptation – it’s true to the source material, remarkably uncommercial and free from many recognizable movie conventions. In essence, A Scanner Darkly is a movie that was produced for all the right reasons – emanating from the film-makers love for PKD and they are to be commended for that.

At the same time that I was enjoying the movie as a PKD fan, I couldn’t help but wonder whether the film would mean anything to people who were newbies to the world of PKD. Would it even make sense to the uninitiated? There was a woman in our screening who was clearly not “getting it,” and she left early. I fear that plenty of people will go into this movie expecting something completely different and be let down. I’m also unsure if the film will generate a lot of interest in Philip K. Dick from new fans. It’s almost like the film is so geared towards those already in the PKD fold that it may miss an opportunity to bring in new ones.

Although it’s completely dominated by all the excitement emanating from the PKD side of my brain, the other hemisphere offers my biggest complaint about A Scanner Darkly – that it may be TOO faithful to the source material. The reason I bring this up is because in many ways, the story of Scanner is one of broken lives and the broken world they inhabit. Since PKD (and Linklater) did such a good job of merging the form and content of the story, like Bob Arctor, the book (and the film) are broken in some ways as well. The story of A Scanner Darkly is fractured, the stream-of-conscious dialogue strained at times and the characters are pathetic. The speculative “madness” of Philip K. Dick in the 1970’s comes through loud and clear in the film adaptation of his darkest novel. Which makes the film feel a bit dated…I don’t agree wholeheartedly with some of the critics who claim this movie is a sign of the times, a commentary on the privacy and rights issues affecting America today. Yes, surveillance is part of the story and an issue we are dealing with now, but the drug wars that once dominated the headlines and conspiracy theories in the decades following Scanner’s first publication in 1977 have been overshadowed in the public consciousness by the immediate dangers of terrorism in the post-9/11 world. I believe that if released a decade ago, this film would have struck a louder chord in a social and political sense.


Artistically however A Scanner Darkly is a triumph of which PKD fans can be proud. Through a series of miracles, persistence and a bold vision from the director we should be counting our blessings that this film exists. Whether the rest of the world embraces A Scanner Darkly is a question for another time…for now the members of PKD Nation need to see this movie in theaters – and bring friends. Our time is now – let’s embrace it.