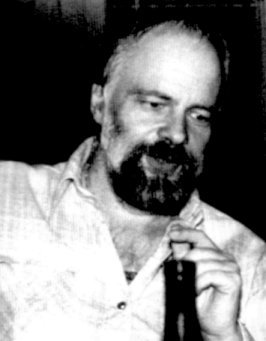 The Philip K. Dick Van Dyke Show (PKDVDS) was performed before a live audience on March 24, 1989 by members of The Post-Void Radio Theater and Shockwave at Minicon 24, which was held over Easter weekend at the Radisson South Hotel in Bloomington, Minnesota. This convention’s theme was “Zen and the Art of Fan Maintenance” and included as guests-of-honor: Fritz Leiber, Harry Harrison and Barry Longyear. Jerry Stearns produced this live radio show, which was broadcast on KFAI Community Radio in Minneapolis, as one of three segments for Minicon 24‘s entertainment Shockwave Live Stage Show called “Weatherproof Windows of the Mind”. The other two were “Repast of the Jello” and “Naked Came the Robot”.

PKDVDS is based on an idea by Peter Stenshoel and was written by him and Brian Anderson, with help from Stuart Matthews, and edited by Jerry Modjeski. All of them were part of The Post-Void Radio Theater, which at the time was doing a science fiction radio program called “Little City In Space” on Fresh Air Radio, home of Shockwave radio, on KFAI. The ostensible premise of PKDVDS involves Philip K. Dick Van Dyke, who is the head writer for the Nicholas Brady Television Show (produced by Leo Bulero), and as the performance opens “we find him returning to his office after a mid-morning dental appointment as his partners Hoppy Harrington and Sylvia Aramchek are busy brainstorming gags.”

But as Philip K. Dick’s favorite Gilbert & Sullivan quote, from Act III of their 1878 operetta H.M.S Pinafore states, “Things are seldom what they seem.” Early on Philip K. Dick Van Dyke says, “I just haven’t been myself all day. First there’s that big fish sandwich I never ordered and then I keep imagining I’m leading this whole other life where instead of being a successful comedy writer I’m a science fiction writer.” We hear him repeatedly calling his wife Laura, Tessa instead. And we meet his brother, Jerry K. Dick Van Dyke, who has a new act involving Perky Pat and Walt dolls. He also calls Laura, Tessa and then offers his brother, Phil, a stick of Chew-Z gum.

What happens after this involves, among other things, Phil’s watching a TV movie called “Pink Motel” (sponsored by Chew-Z gum), a talking goldfish, pink beans, seeing Nicholas Brady on the Horselover Fat TV show, and a speech by the President of the United Ottoman Republic – whose voice cleverly sounds like several different recognizable US Presidents. It is all a very creative, funny satiric parody, with sound effects, reminiscent of the once-upon-a-time days of Bob & Ray, Fireside Theater and Stan Freberg on radio. Yes, radio! (for further info check out: “Science Fiction on Radio”) A good example of this in PKDVDS is the commercial for Chew-Z gum, which goes:

“Friend, in this counter clock world where the penultimate
truth makes you flow your tears and your eye in the sky
looks through a scanner darkly for any signs of vast active
intelligence, isn’t it good to know that Chew-Z gum is
there to lift your spirits in the good old way? Yes, when
your time out of joint causes you to jape, just pop open a
Chew-Z and chew, chew, chew. By vulcan’s hammer
they’re good.”

The Minicon crowd’s reaction to PKDVDS was, however, mixed. Peter Stenshoel recalls being “disappointed that the SF crowd watching was not more receptive to the humor, although the writing was more cerebral and less obvious than most comedies tend to be. One woman in the audience laughed really loud and long at the ad parody made up of all titles of PKD books. I was told that people looked at her strangely as she laughed.”
Jerry Modjeski remembers “One of the sound board operators pulled me aside later and told me the PKDVD skit was the best – I knew this person’s background, alliances and long history with Minicon – and with the more audience-pleasing humor that followed us – took that audio engineer’s compliments to heart.” And David E. Romm, of Shockwave Radio, says “I could tell the major PKD fans in the audience because they’d crack up every now and then, but there were few of them and it didn’t happen all that often. Talking with the PVRT afterward, they mentioned that the Minicon audience got the PKD references, but missed the Dick van Dyke Show references.”

Almost as intriguing is how this mischievous melding of Philip K. Dick and Dick van Dkye into PKDVDS came to be. As noted earlier, the idea originated with Peter Stenshoel, who states that he “first discovered PKD’s work in Japan in 1981. I read The Divine Invasion and then Valis and was impressed very much.” Then, as an undergraduate religion major, he “appreciated Dick’s bringing religion into fiction as well as bringing pop culture into fiction and the notion that there could be meaning inherent within ephemera…”. Peter also feels “it is quite likely that Dick was telling the truth, and Valis was an attempt to show just how difficult it is to express a “truth” which sounds like insanity.” And as for the “truth” in PKDVDS, he says, “…I suppose the few odd episodes of Dick Van Dyke (Walnuts come to mind [“It May Look Like a Walnut”, 2nd season, 1961-62; under the influence of sf, Rob fears that a walnut will steal his imagination and his thumbs], as do the rare talking goldfish from the first episode) gave me the idea of explicating Dick’s life. Both were writers. Both were married….Besides, I felt the larger world needed to know about Dick. I was always a bit put off by how many SF fans I talked to seemed to either have not read Dick or regarded him poorly.”

The script’s editor, Jerry Modjeski, states Brian Anderson “…introduced me to PKD, lending me old paperbacks from his collection (UBIK, VALIS, THE DIVINE INVASION). This was around the same time LITTLE CITY IN SPACE was in production, Peter’s comical radio show which dealt with many of the same far-out themes PKD played with. I was a regular member of that program’s production group.” In addition he “…was fascinated by the DICK VAN DYKE show that spoofed THE TWILIGHT ZONE, and when wacky wordplay connected Philip K to Van Dyke at the middle, that episode suggested enough similarities we knew a full-blown script was possible.” But more importantly, for Jerry, “…PKD appealed to me because of his use of satire, his pervasive influence of synchronicity on his characters, and the “ordinary” characters (just like you or me) unexpectedly having their realities altered.” So, he adds “We packed the script with as many PKD references as possible – Brian and Peter suggested many, as I had read just a few books – partly because we knew we were to perform this before a crowd of science-fiction readers who at least would be familiar with book titles.”

As for what eventually happens to Philip K. Dick Van Dyke in PKDVDS, you will have to listen to the tape. I’m not going to give it away here. Copies are still available, for $10 postpaid (money order), payable to “Peter Stenshoel” at: 3986 Berryman Ave., Los Angeles, CA 90066. Or, you can email him at pstenshoel[at]earthlink[dot]net for further information.

(Note: My sincere thanks to Peter Stenshoel, Jerry Stearns, Jerry Modjeski and David E. Romm for taking the time to share with me their information and reflections about the Philip K. Dick Van Dyke Show,
FCB 2/10/01)