Fans and experts from around the world will meet again in Fort Morgan, Colorado to celebrate Philip K. Dick and his work on August 9th through August 11th for the 2019 Philip K. Dick Festival. This is the second festival. The first one was held in the same location two years ago in 2017.

This location has been selected because Fort Morgan is the final resting place of Philip K. Dick and his fraternal twin sister, Jane.

To see a preliminary program and other useful information go to: http://wide-books.com/2019-pkd-fest.html

To aid in bringing speakers and entertainers to the Festival an ambitious GoFundMe campaign was started. https://www.gofundme.com/PKDFestival This one-day, interdisciplinary conference will seek to explore the contours of the Dickian vast narrative, examining whether it is fair to talk about a Dick-iverse that is neither connected by narrative continuity (like Lord of the Rings) nor the repetition of characters and situations (like Marvel or DC comics). Furthermore, this provides the opportunity to explore how creators, commentators, industry and fans compete over the canonicity of different interpretations of Dick.

We welcome proposals for twenty minute presentations from both creative and academic practitioners, and from undergraduates, postgraduates, researchers and established scholars. Please send 300-word proposals to Thomas Knowles thomas.knowles@bcu.ac.uk and Terence Sawyers TSawyers@qmu.ac.uk by the end of March 12th 2017. 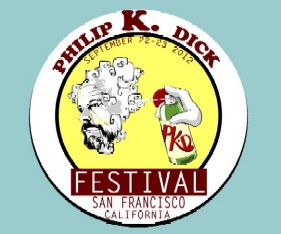 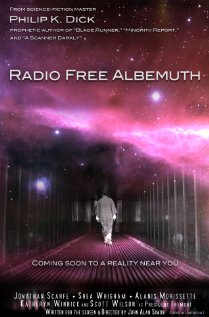 Here is a photo of the proclamation for Philip K. Dick Day: 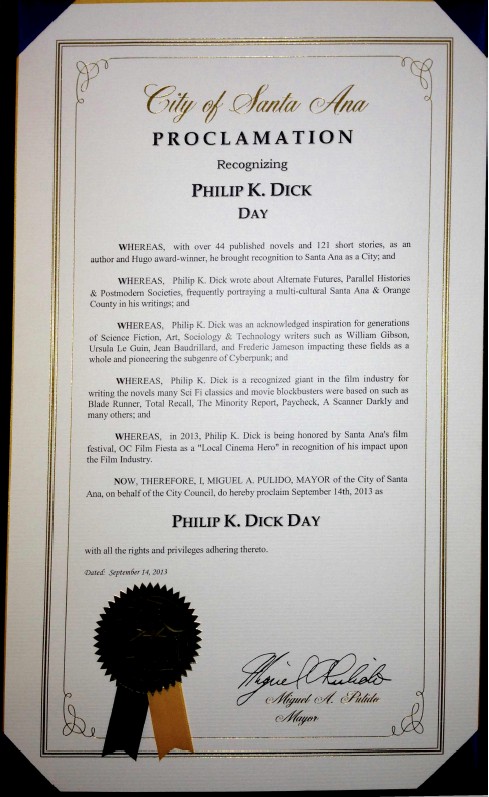 {A big thank you to the moderators of the Radio Free Albemuth Facebook page for this news.}

The dates and location have been announced for the 2014 Philip K. Dick Festival. For details, please visit http://www.philipkdickfestival.com/ and as more information becomes available, it will be posted there.

Thanks to totaldickhead.blogspot.com for two posts from attendees of the Dortmund University Philip K. Dick conference.

An International Conference from November 15-18, 2012 at TU Dortmund University, Germany The history page on the philipkdickfestival.com site for the 2012 Philip K. Dick Festival has been updated with everything that I could find.

If you have anything you would like to share, please email philipkdickfestival[at]gmail[dot]com. Feel free to send photos, links, videos, write ups or anything else you think other fans would like to see. For photo and videos, I would like to be able to write a caption of some sort to provide context for the images so if you can provide a description or a few words, that would be great.

You also may be able to post items to the festival’s Facebook page timeline or tag the festival’s page in photos. I’m not an expert on Facebook so if you’re feeling adventurous, give it a shot and if it doesn’t work, I can remove any errors.

If you plan on attending The Philip K. Dick Film Festival and haven’t made arrangements, you will need to act fast. The film festival is December 7,8, and 9 in Brooklyn, New York. The schedule of films and events is located here and I believe that it is a finalized schedule. Tickets can be purchased for individual movies, film festival days or the entire three day festival. Of particular interest to Philip K. Dick fans, Radio Free Albemuth will be showing on Friday, December 7, 2012 from 7:30 PM to 9:15 PM (EST). Tickets are avialble here. Also showing are three other films that are about adaptions of Philip K. Dick’s work or are about Philip K. Dick: Beyond the Door, No Relation, and Meddlers. There are also many other films that would be of interest to fans of Philip K. Dick. In addition, the festival has organized discussion panels including Philip K Dick, HP Lovecraft and The New Consciousness in which John Alan Simon, the director of Radio Free Albemuth, will be speaking.

There are two upcoming festivals/conferences for Philip K. Dick fans:

An International Conference from November 15-18, 2012 at TU Dortmund University, Germany

Thanks to everyone who attended the 2012 Philip K. Dick Festival in San Francisco on Sept 22-23. You helped make the festival a big success! Looking forward to Southern California in 2014.

I am creating a history page on the philipkdickfestival.com site for the 2012 Philip K. Dick Festival similar to the one for the 2010 festival: http://www.philipkdickfestival.com/history/2010-gilpin-county-colorado/. In addition I would like to post or share as many of the pictures, videos, presentations, reports, articles, etc. from the festival on the Facebook page (https://www.facebook.com/ThePhilipKDickFestival). During and immediately after the festival, there was so much that I saw posted or shared that I was overwhelmed and I would like to capture as much of that as possible.

If you have anything you would like to share, please email philipkdickfestival[at]gmail[dot]com. Feel free to send photos, links, videos, write ups or anything else you think other fans would like to see. For photo and videos, I would like to be able to write a caption of some sort to provide context for the images so if you can provide a description or a few words, that would be great.

You also may be able to post items to the festival’s Facebook page timeline or tag the festival’s page in photos. I’m not an expert on Facebook so if you’re feeling adventurous, give it a shot and if it doesn’t work, I can remove any errors.

A fan based film festival is being organized in New York City called the Philip K. Dick Film Festival to take place November 9 – 11, 2012 in honor of Philip K. Dick’s fantastic legacy in Science Fiction and philosophy. This is a not for profit operation. The goal to show good films inspired by Philip K. Dick, Franz Kafka, Ray Bradbury, Arthur C. Clarke, Jorge Luis Borges and other writers of the metaphysical.

There will be several shorts adapted from Philip K. Dick works (all taken from public domain stories) and a one documentary featuring his son Chris. The festival will have films from other Science Fiction writers/directors as well.

The web site is http://www.thephilipkdickfilmfestival.com/ 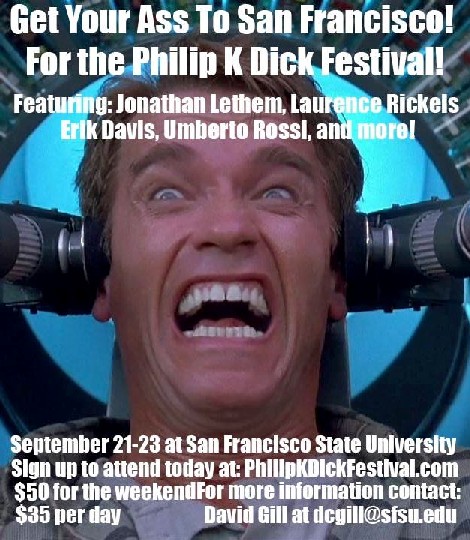 An International Conference from 15-18 November, 2012 at TU Dortmund University, Germany

2012 sees the thirtieth anniversary of the untimely death, at the age of 53, of Philip K. Dick – a figure whose cultural impact within and beyond science fiction remains difficult to overestimate. Dick’s academic and popular reputation continues to grow, as a number of recent monographs, several biographies and an unceasing flow of film adaptations testify. Yet while his status as “The Most Brilliant Sci-Fi Mind on Any Planet” (Paul Williams) is rarely questioned, scholarly criticism of Dick has not kept pace with recent developments in academia – from transnationalism to adaptation studies, from the cultural turn in historiography to the material turn in the humanities. Too often Dick remains shrouded in clichés and myth. Indeed, rarely since the seminal contributions of Fredric Jameson and Darko Suvin have our engagements with Dick proved equal to the complexity of his writing – an oeuvre indebted to the pulps and Goethe, Greek philosophy and the Beats – that calls for renewed attempts at a history of popular culture. The aim of this conference is to contribute to such an undertaking.

At a time when mass protest against irrational economic, political and cultural orders is once again erupting around the world, the Dortmund conference will return to one of the major figures of the long American Sixties: to an author whose prophetic analyses of biopolitical capitalism and the neo-authorian surveillance state remain as pertinent as they were 30 years ago.

Possible topics for panels and papers include but are in no way limited to:

Please send an abstract of no more than 500 words and a short biographical sketch to Stefan[dot]Schlensag[at]udo[dot]edu before 29 February 2012. Presenters will be asked to submit a full version of their 20-minute presentation by 31 August, and an electronic reader will be distributed before the conference to all participants. A selection of the papers given at the conference will be published in book form.

The Largest Gathering of PKD Scholars and Fans Ever Assembled in North America, A Multi-disciplinary Celebration of the Legendary California Writer

Philip K. Dick is arguably one of the most important writers of the 21st century. Dick’s uncanny prescience not only foretold of our current surveillance technology and color-coded terror, but additionally captured the narcissism and psychological withdrawal that defines the early part of this new century. Considered at the time of his death to be little more than a genre writer, Dick’s burgeoning literary reputation was kindled by a handful of fans and scholars. With his recent canonization in the prestigious Library of America and the 2011 publication of Dick’s esoteric religious notes, The Exegesis, now is the time to examine Dick’s influence and how he became such an important literary figure. The Bay Area, home to Dick for the majority of his lifetime, is also the perfect location for the event, allowing fans and scholars to step into Dick’s own past and retrace his steps in this vibrant city by the bay. Sept 22-23, 2012 will be a weekend long celebration and examination of Dick’s life and work.

The conference’s guest of honor will be none other than Jonathan Lethem, the editor for Philip K Dick’s three volumes from the prestigious Library of America, an editor of The Exegesis of Philip K Dick (from Houghton Mifflin), and a celebrated novelist in his own right. Lethem currently holds the Roy E. Disney Chair in Creative Writing at Pomona College and his writing about Philip K Dick appears in his essay collections The Disappointment Artist, and The Ecstasy of Influence.

Stay tuned for more information about the schedule and lodging in San Francisco. If you are interested in either presenting or attending, please contact conference organizer, David Gill: dcgill[at]sfsu[dot]edu. We are currently looking for speakers to give cogent and plain-spoken presentations on the following aspects of Dick’s life and work: